Warning
Our new website is optimized for the most current web browsing technology. If you are using an older web browser, part of our website may not function properly as designed. Please consider upgrading your browser for an error free experience.
Crossroads Environmental

LEAD-BASED PAINT FREE DOES NOT MEAN FREE OF LEAD

In this field, you learn something new every day. Sometimes the information is there, but if you aren’t searching for it, you may not get it. When doing a lead inspection, representative painted surfaces are tested, and the EPA is very specific as to how many components, etc. are tested, so there isn’t much room for “should I test this or not?”. However, we do some lead-based paint inspections in which we are asked only to test the components that will be impacted by renovation. On one of the jobs when I had just gotten certified as a lead inspector, there were only a couple of tasks on the list and replacement of the bathtub was one of them. I remembered from class that a true “EPA-defined” lead inspection only included painted surfaces, but just so I could feel like I actually checked what I needed to, I used the XRF to check the bathtub. Lo and behold, it was screaming with lead! I knew that ceramic tiles often contain lead glaze, but did not suspect the tub. Since our contract was very specific, I simply addressed it in the report and moved on.

This happened several times with the same client, but then we had a client who was looking at purchasing a new home and wanted to be sure that their toddler was not going to be living in a house with lead-based paint hazards, and another client who was looking to purchase a house and planned to start a family soon and was also worried about the potential hazard. In both cases I tested the entire house and did not find any lead-based paint; however, the porcelain-enameled tub contained a high level of lead. I explained that it is not the same as having lead-based paint due to the fact that the lead is cured into the coating and therefore would not chip off like paint, but that caution would still need to be taken when replacing the tub. One of them asked, “could the paint leach into the water?”. I became very curious about the risk of exposure, and by doing a quick internet search I found many articles published around 2010-2011 discussing the discovery of leachable lead on the surfaces of porcelain bathtubs. The studies found high levels of lead on wipe samples collected from the surface of the bathtub, in water allowed to sit in the tub, and on washcloths that have sat in the water and rubbed across the surface of the tubs.

Photos of the tubs: 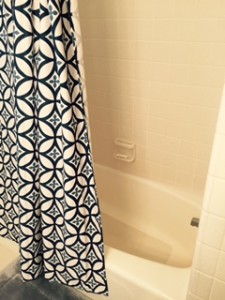 The fact that I have seen firsthand how common this is and how little you hear about it amazed me. As a child who grew up in a late 1960’s vintage house, I took all of my baths in a pink porcelain-enameled bathtub with pink ceramic tile on the walls and floor. I feel like I turned out ok, but as a mother who is now “in the know”, it is something that I would definitely address when asked to perform a lead assessment in a house.

The Housing and Urban Development (HUD) Guidelines define a house as lead-based paint free as a property where no lead in amounts greater than or equal to 1.0 mg/cm2 in paint (or surface coatings) was found on any building components, using the protocol defined in the HUD Guidelines. It has a disclaimer that says that “a lead-based paint-free property may contain lead incorporated into components that are not lead-based painted, such as ceramic tile, or painted components below the standard stated in their definition”.

Moral of the story: lead-based paint free does not mean free of lead.